The first of our two audition nights for our March 2020 production “Allo Allo” was held at the RAFA Club, Llangollen, 7.00pm Tuesday 10th December. The second, to be held at the The Memorial, Market Street, Llangollen (opposite the main car park), will be at 7.00pm on Thursday 12th December.

If the audition dates are difficult for you, email Lyn or Chrissie, and they will do their very best to accommodate alternatives.

Our spring Production for 2020 will be “Allo Allo,” by Jeremy Lloyd and David Croft. It will directed by Chrissie Ashworth.

The play will be performed at the Llangollen Town Hall 19th, 20th, and 21st March with a matinee on Saturday 21st. There is a big cast and the smaller roles (e.g. airmen, peasants) will be offered out a little later.

What Chrissie needs to hear is your accent for the role or roles in which you may be interested. There are German, French, Italian and English!

Below is a very brief characterisation; you could probably gain more tips on the characters by going onto Wikipedia and also watching You Tube, although this is a full length play and not from the actual tv series.

All characters need to be larger than life! It is a complete albeit very clever, farce with many innuendoes. Set in the World War 2 in France during the French Resistance two years into the war, puts it at around 1941.

RENEE` 40+ French. Café Owner around which the play is performed. Main character. Married to EDITH but has dalliances with his waitresses and has a German admirer (male). Not a chivalrous French man but always looking to save his own skin. Main lead

EDITH 40 + French. Edith is the hard of hearing, tone deaf long suffering wife of RENEE and has a complete blind spot as to the limitations of her singing ability. Suspects her husband of playing behind her back with the staff… but can never quite catch him out. Devious, stubborn.

YVETTE 20 -30 French. Waitress at the Café. In cahoots with Renee and is unaware of the goings on between Renee and his other women!

MICHELLE 20-30s. French. “I shall say this only once” is her catchphrase. Smart, waitress, has lots of favours to give to the men!

MIMI 20s. French. Petite (this is referred to on sever occasions) and a waitress. Lady of the night

ALBERTO BERTORELLI 30s – Italian. Vain, Flamboyant. Adds an “a ” at the end of words Reminds me of the Strictly Come Dancing judge!!

HELGA German. 20s + Private in the German army. Smart. Prepared to give herself out for the good of the Cause.

CRABTREE 30 – 40 English. Police. Has illusions of being able to speak French with a good accent. He can’t.

Ages are very approximate and make up and hair can age a good deal, if necessary – or even the other way!

Please please look at the characters on social media. It will give you a feel of the various characters. Audition pieces (very simple and short).

We look forward to seeing you again soon… 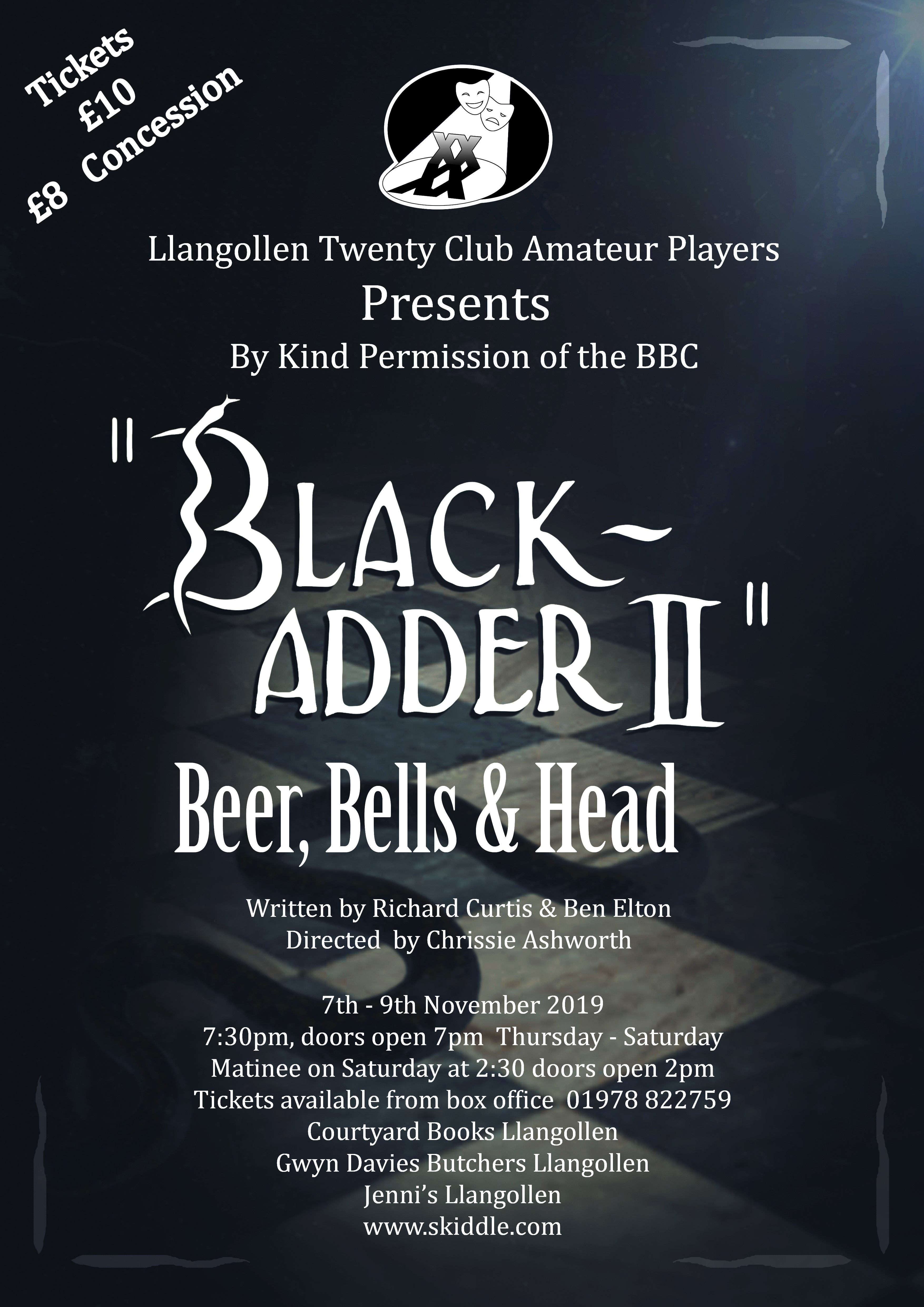 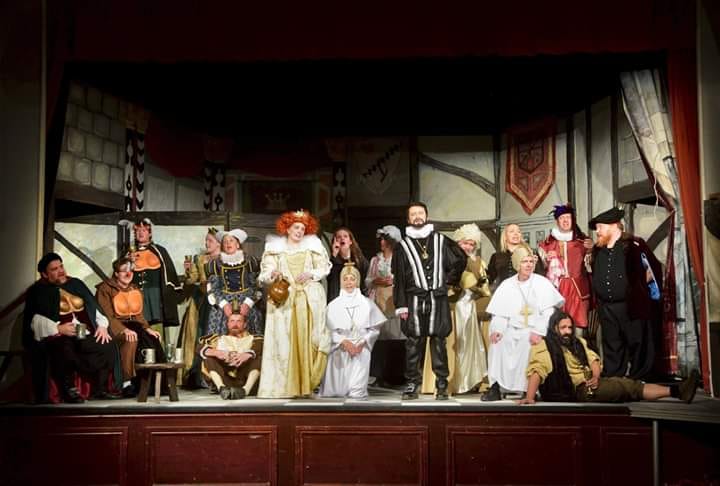 November 2019 – BLACKADDER 2 Hailed a success by audiences, and The Club….

“HEAD,” and “BELLS” were both in the first ‘half,’ with “BEER” concluding after the interval.

Our excellent audiences seemed to thoroughly enjoy the show, as too did the cast, and the crew.

Thank you once again for supporting us. We are now looking forward to revealing our March 20120 play soon. Audition dates will also be posted here.

We look forward to seeing you…

The Twenty Club Amateur Players, to use the full name, is one of the oldest dramatic societies in North Wales

One of the oldest dramatic societies in North Wales, the club was founded in 1946 with twenty original members, which gave the club its name. The club presents two plays a year, in autumn and spring, with a mixture of comedy, drama and period productions.

If you are interested in appearing in any of our productions, or helping in any way, please contact us and come to the auditions (you don’t have to be a member as they are open to all). Also, just because we are called the Twenty Club doesn’t mean you have to be over twenty to join – we are called that because we started in 1946 with twenty members! 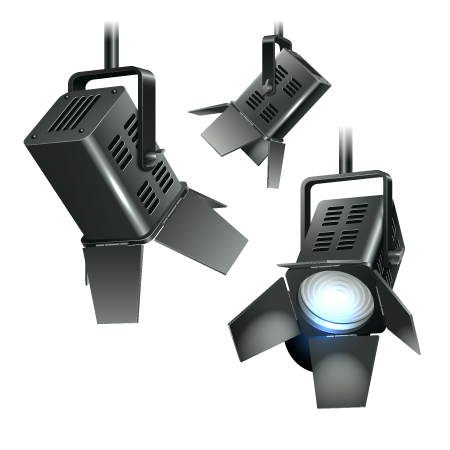 Please come along and get involved.

We are also looking for people who would be interested in helping backstage, front of house, publicity or tickets, there are many jobs available – far outnumbering the number of cast needed and all vitally as important! If you would like to be involved, even if you can only spare a little time, we would love to hear from you. We also hold a number of social evenings throughout the year, so you don’t even have to work to be a member!

We still need younger blood to come in and help across all roles, so that the reputation we have of putting on good productions with excellent sets can continue. It truly is a team effort to stage a production ? Come and try us out!

A little intro to us here at the Llangollen Twenty Club Amateur Players.

The society’s first production was ‘Distinguished Gathering’, and since then it has presented over 100 separate plays. In the 21st Century, the Twenty Club continues its programme of events, visits and readings, and currently has more than 100 members, many of whom live locally. One of the founder members, Betty Lowe, is now Life President and still active on stage. We strive to reach professional standards in every aspect of production, and pride ourselves on the welcome we give to audience members, both old and new.

A member of the National Theatre for the Disabled, the club takes productions to a Cheshire Home in the Llangollen area. Along with other users of the Town Hall in Llangollen, we are working towards a grant application to improve the social and performance amenities in this fine example of a Victorian civic building.

Should you have any questions, or wish to find out more, then please do not hesitate to contact us using the ‘Contact Us’ page.

Following the AGM, we would like to welcome four new committee members; Chrissie Ashworth, Arwel Jarvis, Neil Evans, and Joe Clifford to the Committee, and to thank Lizzie Clifford, Lesley Jones, Dan Pedley and Jean Evans, for their support, loyalty, and commitment to Club over a number of years.

(Secretarial duties will be carried out by the above until a permenant member is appointed). 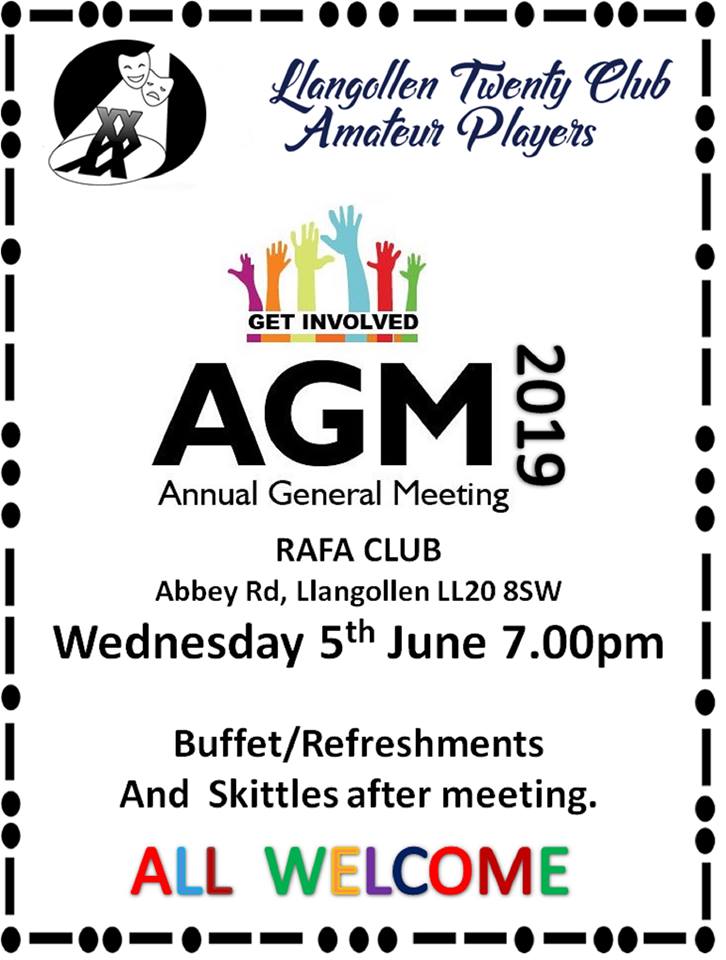 Following the usual ‘business’ of The Twenty Club’s AGM, including the Chair’s introduction, the finiancial reports, and the election of several new officers, an enjoyable evening was had by all.

A buffet was provided, and we then got down to the serious business of ‘skittles!’

Pictures will follow, including presentations to both the winning and the losing teams!

The AGM proved an excellent oppoortunity to catch up with old friends, and to meet new ones! It was a great fun evening.

Thank you for coming. We look forward to seeing you again soon.